Some Are Born To Greatness. Jazz Special Forces Allied Commander Ryan Wert Had REO Town Thrust Upon Him. Then He Returned Fire.

Superlatives become as whipped rats in the presence of such unsurpassable command of gear, sound waves, mixology mastering mastery and any of the acolytes who would ever order their Forces to launch any mission meant to move the asses of the masses. He is the ultimate buzzkill for those whose failure of words suffers its own acclamations of silence.

He is Ryan Wert. But how can one Man be contained in only two words?

Engineer, Co-Producer and Highly Unelected Official, Ryan Wert, owner and working guts of Lansing's Elm Street Recording. It helps to add the words. I call on everyone to organize their own community conversations on the immortality already unfolded before us.

This article published about him last year will help greatly with that: https://www.lansingstatejournal.com/story/news/local/2017/01/19/how-ryan-wert-became-mayor-reo-town/95799828/

Thanks for everything, Mr. Mayor.

A great guy to be around if you want to see how the future of any community is begun by Doing. 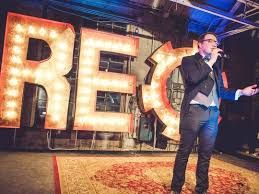